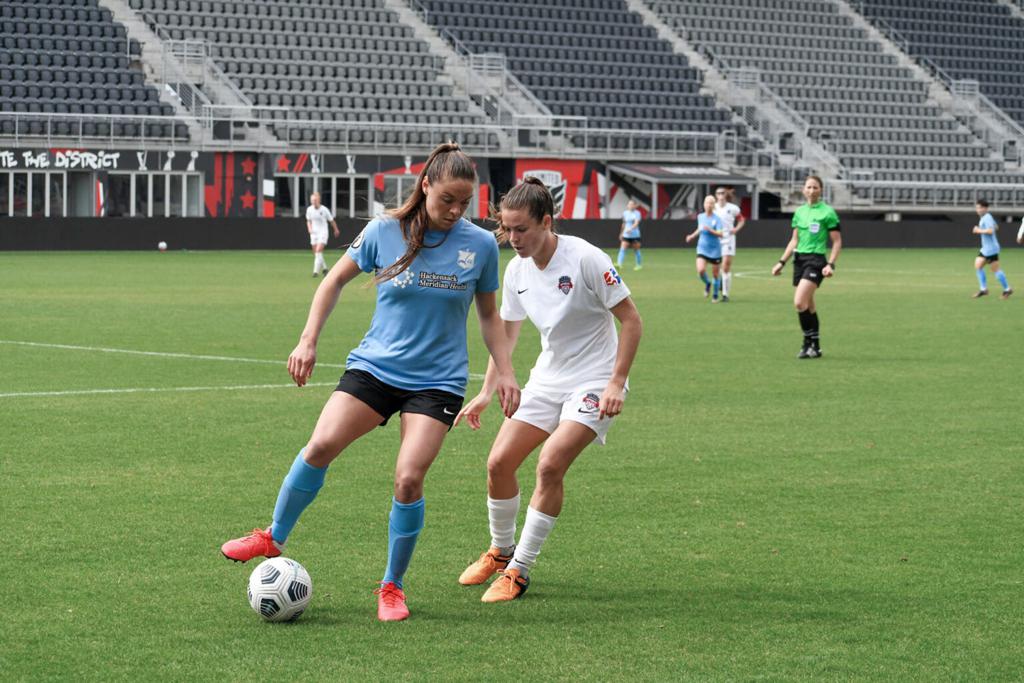 Washington, D.C. (March 28, 2021) – Sky Blue FC earned another preseason victory today with a 2-1 win over the Washington Spirit at Audi Field. Goals were scored by Paige Monaghan, from a McCall Zerboni assist, and from Sodam Lee. The club stands 3-0 in preseason competition this year, and will now begin final preparations for the NWSL Challenge Cup which begins in April.

“It’s great to go into the start of the Challenge Cup with our 3-0 preseason,” said Head Coach Freya Coombe. “We knew today would be our biggest challenge but we were very disciplined defensively in the first half and then we were able to play more possession in the second half. Attacking offensively we asked for ourselves to be efficient and make those final balls and final chances count and that’s what happened with our goals today.”

“It was great transition that started with McCall who played me through,” stated Monaghan. “Obviously facing an NWSL for the first time in a long time, we definitely knew it would have its challenges but I think we had some small victories today. It’s awesome that we won but we have a lot more work to do and I’m looking forward to it.”

3’ Sky Blue did well to capitalize on their first opportunity of the game when midfield captain McCall Zerboni sent a perfect through-ball up the right side of the field into the path of an on-rushing Paige Monaghan. With just one touch she sent a low strike in that deflected off the Spirit keeper and into the net to put Sky Blue up 1-0 early in the match.

37’ After an errant Sky Blue pass, the Spirit were able to capitalize by finding Ashley Sanchez near the top of the goal. She put in a short range shot past an outstretched DiDi Haracic.  Sky Blue defender Mandy Freeman was handed a yellow card after the goal.

60’ Midfielder Sodam Lee, who is in her first season in the NWSL, scored an incredible volley that turned out to be the game winner for Sky Blue.

This marks the final preseason match for Sky Blue FC. The 2021 NWSL Challenge Cup begins on April 9 and a 24-match season kicks off on May 15. Digital Memberships are on sale now here. Season Ticket Memberships will be available at a later date.