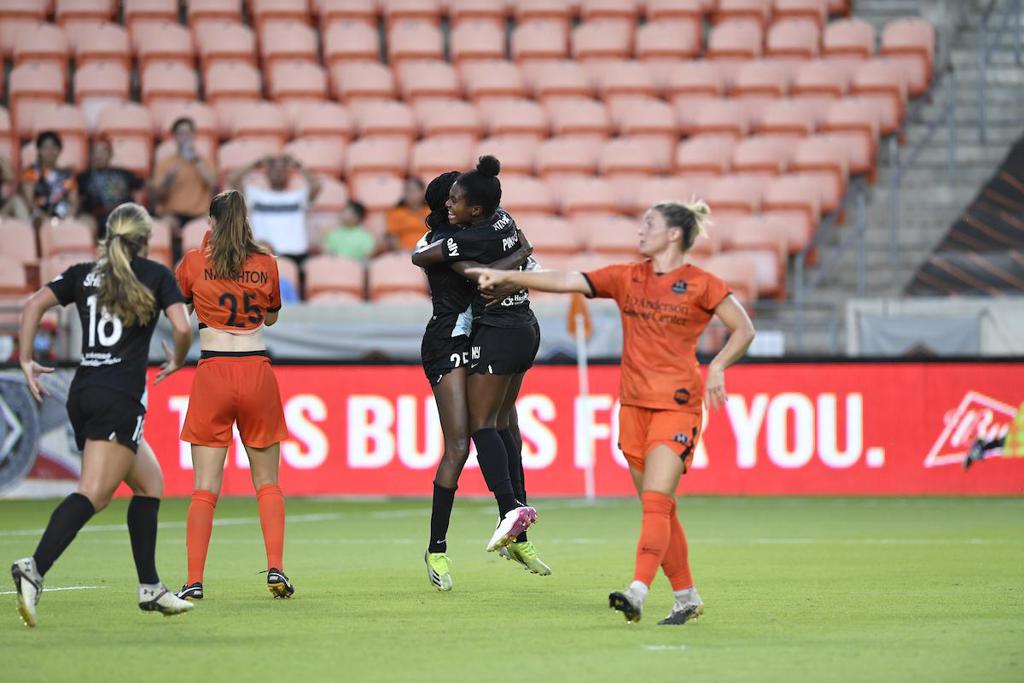 NJ/NY Gotham FC traveled to BBVA Compass Stadium to face the Houston Dash on a hot and humid Sunday night. The team earned a 1-1 draw after an early second-half goal from Gabby Seiler and a late equalizer from Ifeoma Onumonu. With the result, Gotham FC remains in second place with 20 points and extends their unbeaten streak to eight games.

The opening minutes of the game saw Gotham FC come out with a strong attack and the Houston Dash looking to capitalize off the counter-attack. Both teams continued to grow into the game, putting pressure on the opposition's defense and creating chances. Despite the efforts, they headed into the half scoreless.

The second half started with a back and forth from both teams. Less than ten minutes into the half, Houston earned a corner kick that fell to Seiler at the six yard box and buried the volley in the upper left corner to give Houston the 1-0 lead. Gotham FC responded back almost immediately with a goal from Onumonu that was ultimately called back for offside. With the match nearing the end of regulation, Delanie Sheehan played a ball into the box for Onumonu who slotted home the late equalizer. Onumonu has now scored four goals for the team and is level with Margaret Purce as the team’s leading goal scorers. The Gotham FC backline thwarted several stoppage time shots from Houston to close out the match and earn a point on the road.

“I thought we started brightly despite the conditions that were pretty tough. We created some chances, I think we had them pretty penned in, and the goal went a little bit against the run of play. I’m disappointed with the way we handled the transition from our corner and obviously gave away another corner which they scored. That was a disappointing moment. I thought we controlled a lot of the game, but I’m pleased with the response of the team. They didn’t stop, they didn’t give up, they just kept going and found that equalizer, which is important as all of our road points add up in continuing our unbeaten record [on the road].

Following Sunday’s match, Gotham FC will return home to take on the North Carolina Courage at Red Bull Arena on Saturday, August 7 at 7:00 p.m. ET. The team will remain at home the following weekend to face Racing Louisville on Sunday, August 15 at 5:00 p.m. ET. Single and group tickets are now on sale and pricing details can be found here.