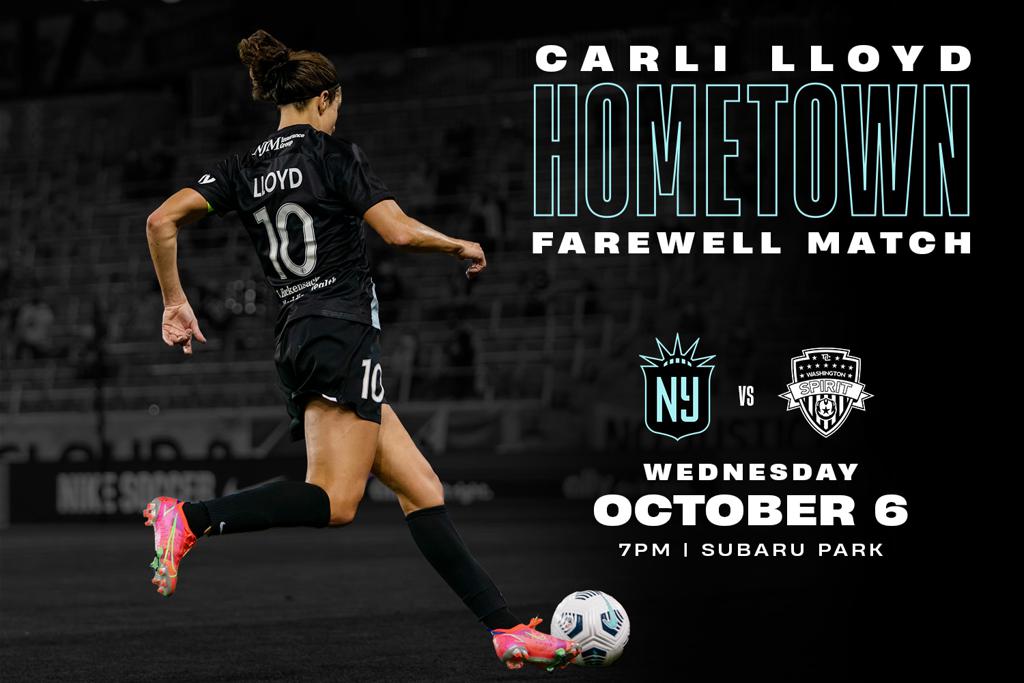 In celebration of soccer legend Carli Lloyd’s illustrious career, NJ/NY Gotham FC of the National Women’s Soccer League (NWSL) will play its Wednesday, October 6 match against the Washington Spirit at Subaru Park in Chester, Penn. The action kicks off at 7:00 p.m. ET and viewers can follow along on CBS Sports Network (U.S) and Twitch (international).

“I am beyond thankful to Gotham FC and the Philadelphia Union for making this happen,” said Gotham FC forward Carli Lloyd. “I have played many games at Subaru Park with the National Team and to have the opportunity to play in front of my home crowd on the club level will be an amazing memory. Let's be loud and fill the stadium!”

Born in Delran, N.J., Lloyd grew up less than 15 miles from Philadelphia and is one of the most decorated soccer players of all time. She’s a two-time World Cup Champion, two-time Olympic gold medalist, and two-time FIFA Player of the Year. Lloyd ranks second in international appearances behind Kristine Lilly with 312 and is tied for fifth in international goals with 128. On August 16, Lloyd announced she is retiring from soccer following a slate of friendlies with the U.S. Women’s National Team (USWNT) and the conclusion of the NWSL season.

“We are honored to provide Carli an opportunity to play one of her final matches in front of her friends, family, and hometown fans,” said Tammy Murphy, Club Chair and Majority Owner of Gotham FC. “She is a true legend in the sport and has inspired an entire generation of players to play with strength and determination. It is my privilege on behalf of ownership and the entire Gotham FC community to provide her the sendoff she deserves.”

Lloyd is set to play her final four matches with the USWNT in September and October. While she has previously played at Subaru Park with the USWNT, the October 6 match will be the first time Lloyd has played in the Philadelphia area with a club team. With her final USWNT matches being played in Ohio, Kansas, and Minnesota, the match also serves as one of the last local opportunities for hometown fans to watch Lloyd play before she enters retirement.

“I’ve had the pleasure of playing with Carli over the years and witnessing her determination and competitiveness firsthand,” said Interim General Manager Yael Averbuch West. “She has done everything she can to grow this sport and club. Her career is an inspiration and I’m thrilled we can give her the chance to play in front of her hometown fans one last time.”

“On behalf of the entire Philadelphia Union organization, we are incredibly honored to host a legendary player like Carli Lloyd for her hometown farewell at Subaru Park,” said Philadelphia Union President Tim McDermott. “Carli has made her city proud on an international stage and inspired passion for the game in children of all ages. We look forward to partnering with Gotham FC to host her Philly farewell.”

Gotham FC Season Ticket Members and Groups will have the option of receiving comparable tickets for the game at Subaru Park, exchanging their tickets for another Gotham FC home match at Red Bull Arena (RBA), having the ticket value credited to their account, or requesting a refund. The club will send communication to all Season Ticket Members and Groups early next week with more information.

Single game ticket buyers will receive a message from Ticketmaster informing them that the October 6 match at Red Bull Arena has been canceled. Those fans will then be able to request a refund or have their account credited for a future Gotham FC event.

Individuals who purchased tickets to RBA as well as Philadelphia Union season ticket members will have access to an exclusive presale. Soccer clubs and others who want to be a part of this special event together can contact the Philadelphia Union Group Sales Team by email at groups@philadelphiaunion.com or by phone at 610-497-9909. General public tickets go on sale on September 16 at gothamfc.com and philadelphiaunion.com. Fans can also purchase tickets by calling 877-218-6466.

The Philadelphia Union is an innovative, forward-thinking professional soccer club competing in Major League Soccer (MLS) and one of Philadelphia’s five major league sports teams. Driven by unprecedented fan support, MLS awarded the Philadelphia expansion franchise rights to Jay Sugarman in 2008 and the Union kicked off its inaugural season in 2010. The club has reached the finals of the Lamar Hunt U.S. Open Cup in 2014, 2015 and 2018, and has appeared in the MLS Cup Playoffs in 2011, 2016, 2018, 2019, and 2020. In 2020, the Union were awarded the club’s first Supporters’ Shield after finishing with the best regular season record in MLS.

The Union play at Subaru Park in Chester, PA on the banks of the Delaware River. The custom-built stadium is part of the Union’s unique waterfront campus, featuring a historic power plant rebuilt into a 400,000 sq. ft. creative office building, a state-of-the-art Training Complex, over 7 acres of professional-grade practice pitches and multiple onsite parking fields. For more information about the Philadelphia Union, visit www.philadelphiaunion.com and follow @PhilaUnion on Twitter or Instagram.