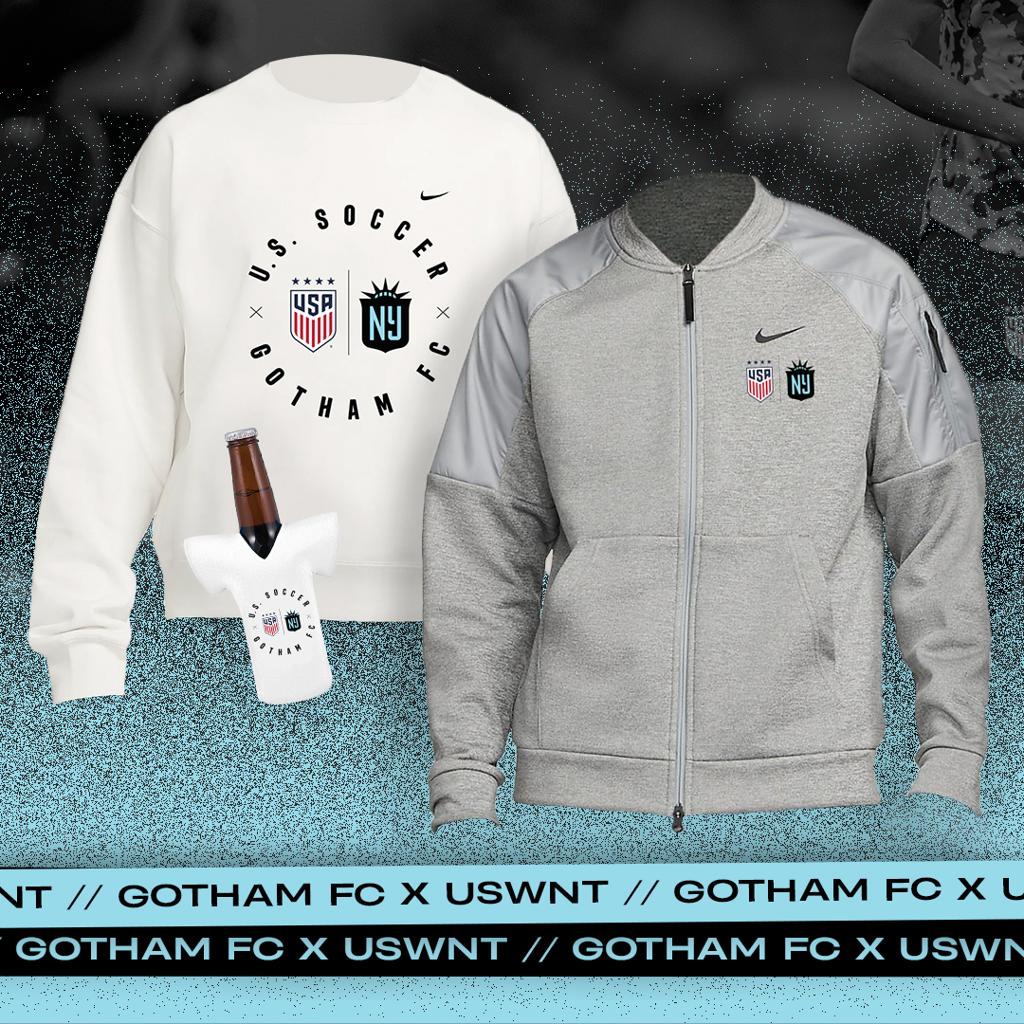 HARRISON, NJ: NJ/NY Gotham FC, the U.S. Women’s National Team, and U.S. Soccer have partnered on a limited-edition line of co-branded merchandise in celebration of the USWNT’s international friendly against Germany at Red Bull Arena in New Jersey on Nov. 13.

The Gotham FC + USWNT collaboration marks the first of its kind in merchandise between the U.S. Women’s National Team and a club in the National Women’s Soccer League. The line of exclusive gear consists of a jacket, crew neck sweatshirt, and koozie.

“We’re excited to partner with the U.S. Women’s National Team and U.S. Soccer on this limited edition merchandise collaboration,” said Nan Vogel, Gotham FC Senior Vice President of Partnerships, In-Game Experience and Community. “It’s a special opportunity to provide fans with unique, new ways to engage with the teams they love and celebrate women’s soccer at both the club and national level.”

The USWNT/Gotham FC co-branded jacket will be available at the USA – Germany game on Nov. 13 as a complimentary gift to each person who signs up for a new Gotham FC season ticket membership for the 2023 NWSL season. Fans will receive one jacket for each season ticket membership deposit placed on site at the game at Red Bull Arena on Nov. 13. Fans can sign up at the Gotham FC booth in Fan HQ outside the stadium from 2:30 – 4:30 p.m., or at the Gotham FC booth on the concourse behind sections 114/115.

The Gotham FC/USWNT crew neck sweatshirt will be available for purchase at official U.S. Soccer merchandise stands at Red Bull Arena the night of the USA – Germany match.

The koozie will be distributed as a complimentary gift to fans who visit Gotham FC’s pregame Fan HQ activation on Nov. 13 at Red Bull Arena.

Fan HQ kicks off for the USA – Germany match at Red Bull Arena at 2:30 p.m.; doors open at 5 p.m.and the game begins at 6 p.m. Limited tickets for the match remain available at ussoccer.com. Kristie Mewis of Gotham FC is on the roster for the U.S. National Team for this match.