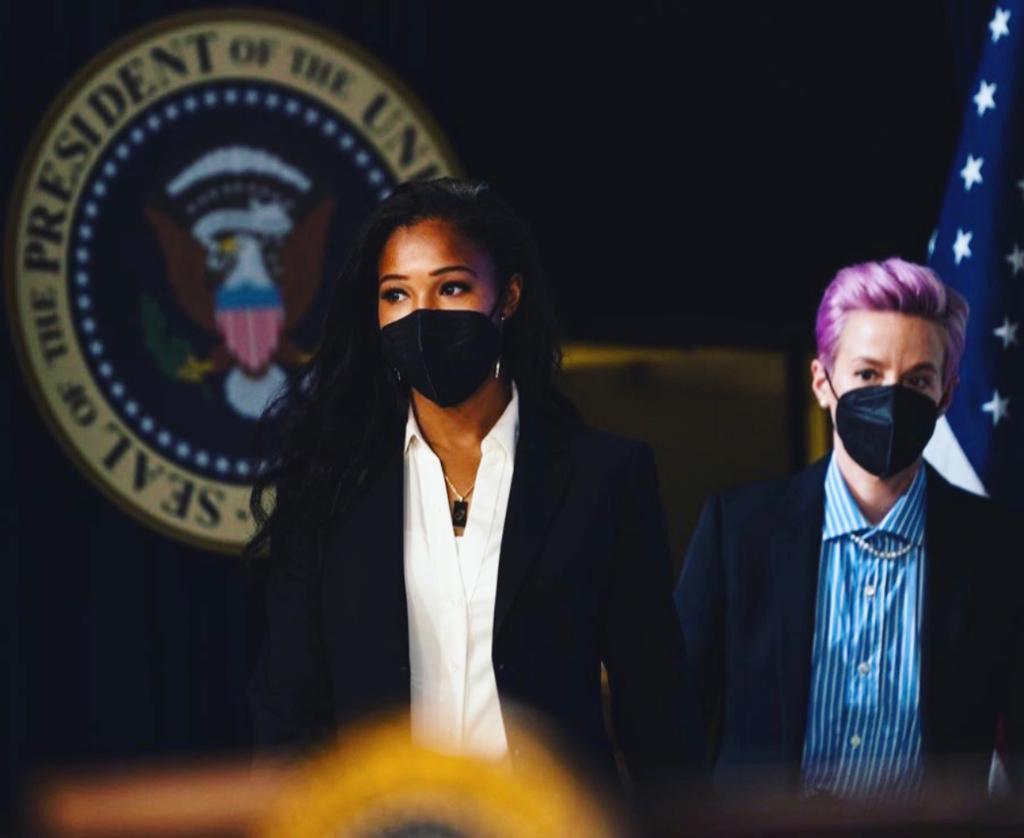 Sky Blue FC and USWNT player Margaret “Midge” Purce made an in-person appearance at the White House Wednesday, in honor of Equal Pay Day. She was joined in person by USWNT teammate Megan Rapinoe after an invite from President Joe Biden and First Lady Dr. Jill Biden.

“I was at home practicing the piano and I got this email that was an entire roster of national team players who have been a part of the equal pay fight with an opportunity to go to the White House on Equal Pay Day,” said Purce in regards to how the opportunity came about. “I thought ‘oh my goodness’ let me respond super quickly!”

“I was so excited because it was Equal Pay Day so it was for something that obviously I really believe in and it affects my life and my peers’ lives very heavily.”

As part of the visit, Purce was also given the opportunity to provide a speech from the White House Press Room. She used the platform to draw attention to the lack of investment in women’s sports and how this has affected equity of pay.

“People really, I don’t think, understand the dynamic of how men’s sports came to be so popular and how women’s sports are struggling to be popular,” she went on. “They think it’s a very supply/demand situation, and it’s not. There was an industry-wide strategic push to make men’s sports what it is today and it was really, really effective.”

It is wonderful to be here on a day as important as this. A day dedicated to raising the awareness of national pay inequity. Over the past few decades we have witnessed women progress in the workforce.  Displaying excellence, commitment and resilience across industries. We have seen women rise to be champions for change and pioneers of thought; all while wrestling with systems that have been unable to upgrade at the same pace as them. Brava ladies.

The strength of unequal pay rests on the notion of unequal value…it is an issue of equity.

When men began sports leagues they were supported by billions in taxpayer subsidies, they were prioritized in media and afforded time to grow…the investment was incredible and the return was incredible.

I have watched and joined a league of women, who are remarkable at their craft. And together we have asked for the same grace that was given to men in the formative years of their leagues…true investment.

I have spoken of equal pay in formal settings such as this and in informal exchanges. And often I am resisted with the declarations like “there just are not enough people interested in women sports”.

My response to that is:

You would never expect a flower to bloom without water…but women in sport who have been denied water, sunlight and soil.. are still expected to blossom.

So invest in women, then let’s talk again when you see the return.

I want to thank the USWNT for being an emblem of hope, voice of reason and force for change. Mr. President and Madam Vice President thank you for your commitment and attention to advancing economic security of women. We look forward to working alongside you.

And it is my distinct pleasure to introduce First Lady of the United States Dr. Jill Biden.“