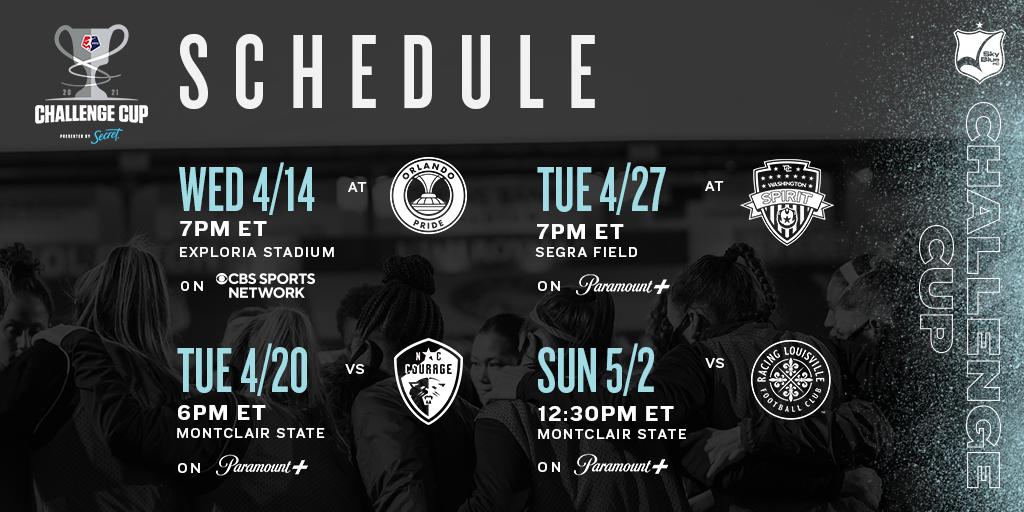 Harrison, N.J. (March 9, 2021) Sky Blue FC of the National Women’s Soccer League (NWSL) today announced its 2021 Challenge Cup presented by Secret Deodorant schedule. The team is competing as part of the East group that is also comprised of Racing Louisville FC, North Carolina Courage, Orlando Pride, and the Washington Spirit. Sky Blue will open the tournament against the Orlando Pride at 7:00 p.m. ET on Wednesday, April 14, at Exploria Stadium in Orlando, FL. CBS Sports Network is scheduled to air the match.

The 21-match tournament will be played in group play with each team playing four matches followed by the final. The opener and three additional matches will air on CBS Sports Network, the final will air on the CBS Television Network and stream on Paramount+, the newly launched premium streaming service from ViacomCBS, and every other match will stream exclusively on Paramount+ in the U.S. All matches will be available internationally on Twitch, including in Canada for all matches that are not on CBS Sports Network.

Following the opening match in Orlando, Sky Blue welcomes the Courage on April 20 to Montclair State University Soccer Park at Pittser Field. The Club then travels to Segra Field in Leesburg, VA to face the Washington Spirit on April 20. Sky Blue closes out its Challenge Cup group play at MSU Soccer Park on May 2 when it faces Racing Lousiville FC for the first time in history. These matches will air on Paramount+ in the U.S. and on Twitch for international audiences.

The state of New Jersey recently-announced that outdoors venues that hold 5,000 people or more can begin allowing up to 15% capacity. Ticket information for the two home Sky Blue matches will be available at a later date.

“With this announcement, everything is really starting to feel real for us to get back to playing consistently in our home market again,” stated General Manager Alyse LaHue. “It has been a long time coming, but we are thrilled to safely welcome back our fans and I know our players have been eagerly awaiting this moment.”

The top team from each division competing in the final slated for May 8, 2021. The championship site will be determined by the league at a later date. For a list of the 2021 NWSL Challenge Cup rules and regulations that differ from NWSL’s regular-season policies and procedures, click here.

Following the Challenge Cup, the NWSL’s 10 teams will face off in a 24-game regular season beginning May 15, 2021. The league will not break for the 2021 Olympic Games and the regular season will conclude on Oct. 30, 2021. Six teams will qualify for an expanded NWSL playoffs set to begin on Nov. 6, 2021, with the top two seeds receiving a first-round bye. The league’s ninth season will conclude with the NWSL Championship on Nov. 20, 2021.