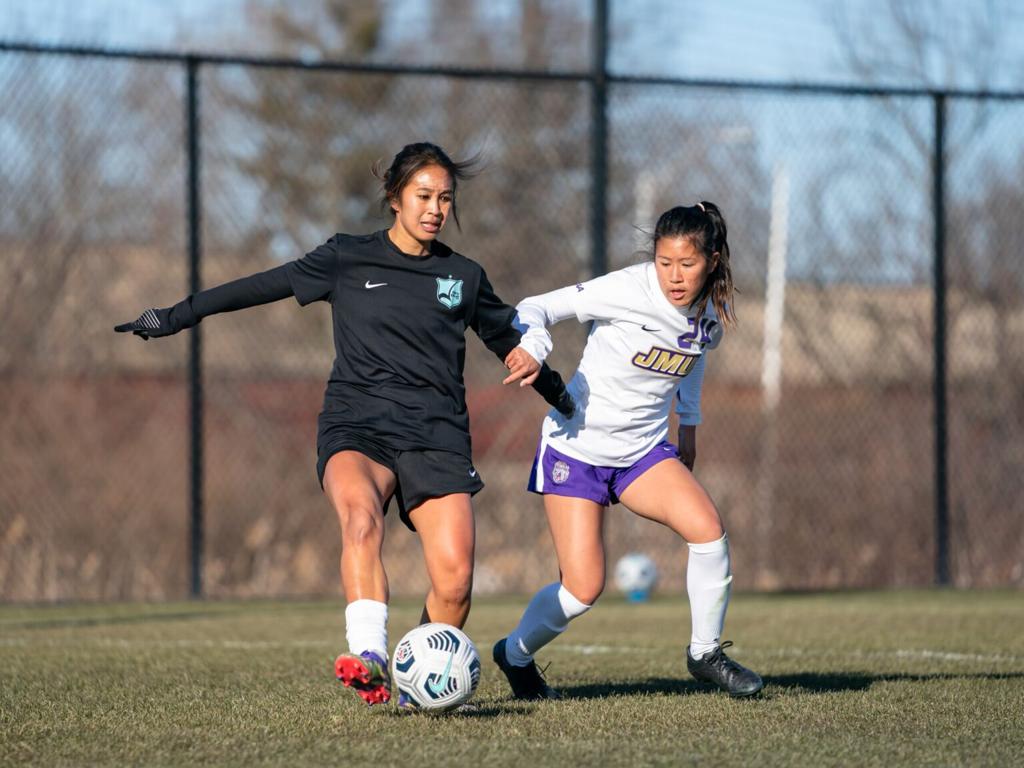 Sky Blue FC opened its preseason matches with a 6-0 victory against James Madison University on Sunday afternoon.  A total of five different Sky Blue players put the ball in the back of the net with forward Carli Lloyd notching two goals and two assists in 45 minutes of work.

“We entered the match looking to solidify our core principles and re-emphasizing our playing style,” said head coach Freya Coombe. “There were some very good moments in the match where we could see our style and playing philosophy coming through.”

Sky Blue controlled the possession for much of the match, especially in the wider areas of the pitch. After several spells of possession with crosses coming from winger players, forward Nahomi Kawasumi was able to get on the end of one in the 21st minute and put the ball into the back of the net. Just four minutes later, a Sky Blue corner led to a handball in the box called against JMU. Midfielder Elizabeth Eddy stepped up and converted the penalty to put Sky Blue up by two goals.

At the thirty-minute mark, the first round of sweeping substitutions saw defender Estelle Johnson come on for Gina Lewandowski, midfielder Domi Richardson enter for Jennifer Cudjoe, and goalkeeper Mandy McGlynn come on for Didi Haracic. Sky Blue maintained most of the possession with Eddy continuing to find space in the wide areas sending in crosses consistently.

Another round of changes occurred in the 45th minute with forward Paige Monaghan entering for Kawasumi, Lloyd coming on for forward Ifeoma Onumonu, forward Midge Purce entering for Eddy, and defender Sabrina Flores for Erica Skroski. Less than a minute after entering the match, Flores sent a cross in from the right side of the pitch that was headed home by Lloyd for a 3-0 lead.

Sky Blue continued to hold the possession until the third round of substitutes occurred in the 60th minute. Midfielder Nicole Baxter came on for Sodam Lee, Cudjoe entered the match again for midfielder McCall Zerboni, Lewandowski re-entered for defender Mandy Freeman, defender Caprice Dydasco made her first appearance following an ACL injury in the 2020 preseason when she entered for Dorsey, and goalkeeper Megan Hinz entered for McGlynn.

“It was so fun to just play soccer with my friends again,” said Dydasco. “It was great to go out and play for the love of the game.”

Eight minutes later, Lloyd slotted a ball to Monaghan who slipped past the keeper for the fourth goal of the match. Less than two minutes later in the 70th minute, Lloyd notched her second assist of the match when Purce took her pass and put the ball into the back of the net.

The final substitution of the match came in the 75th minute as midfielder Taylor Aylmer entered for Richardson. During the 88th minute, as the match was nearing the end, Lloyd went 1v1 in the box against a JMU defender eventually winning and netting her second goal of the match to give Sky Blue a 6-0 victory.

“It feels great to be back here at Sky Blue and out on the pitch today with all my teammates,” said Lloyd. “I am looking forward to being back in a club environment and helping the team as we strive to win a championship this season.”

Sky Blue FC is preparing for the 2021 NWSL Challenge Cup beginning on April 9 and a 24-match season kicking off on May 15. Digital Memberships are on sale now here. Season Ticket Memberships will be available at a later date.