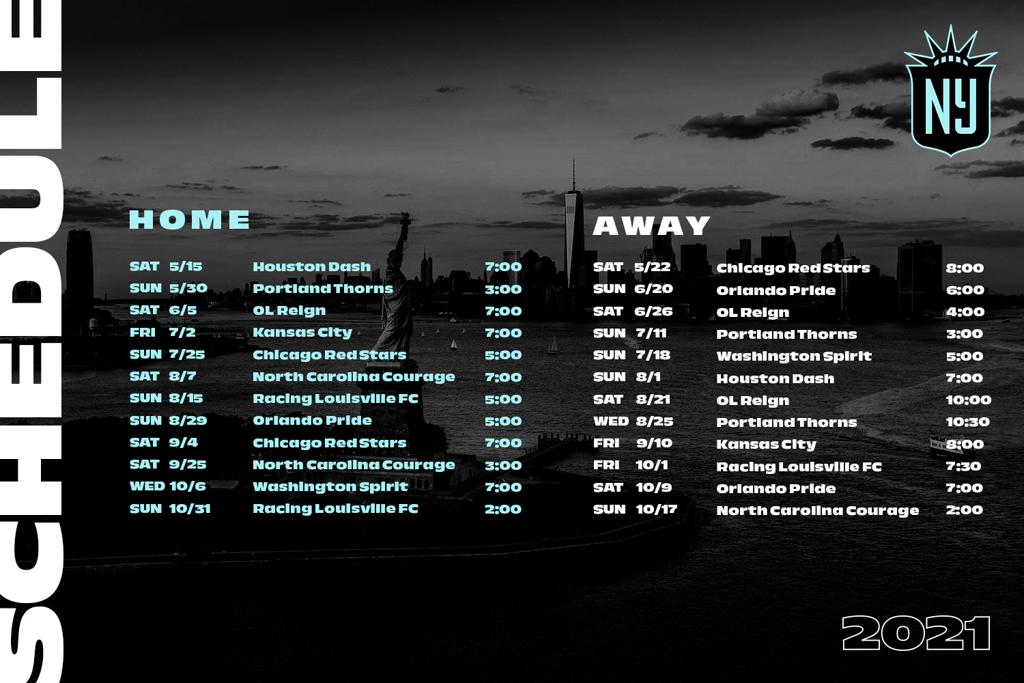 Harrison, N.J. (April 27, 2021) – The National Women’s Soccer League (NWSL) today announced the full 2021 regular season schedule. NJ/NY Gotham FC will play 12 home and 12 away fixtures during the regular season, which extends from mid-May through the end of October. Gotham FC will finally be making their home-debut at Red Bull Arena, in Harrison, N.J., after the 2020 season was delayed due to the pandemic.

Gotham FC opens up their season at home against 2020 Challenge Cup winners Houston Dash on Saturday, May 15. Kickoff is currently set for 7:00 p.m. ET. The team will head to Chicago the following week to take on the Red Stars at SeatGeek Stadium on Saturday, May 22 at 8:00 p.m. ET.

At least one home game a month will be featured between May and October, including three home games in the month of August. There will be no break in the schedule for the 2021 Tokyo Summer Olympic Games, which is expected to feature several Gotham players.

Gotham FC will end the regular season at home at Red Bull Arena on Sunday, October 31 for a Halloween matchup with Racing Louisville FC at 2 p.m. E.T. The top six teams at the end of the regular season will advance to the expanded NWSL Playoffs, with the top two seeds receiving a first-round bye. The league will close out the 2021 campaign with the 2021 NWSL Championship on Nov. 20.

Gotham FC’s full 2021 schedule can be found here. Game day promotional themes will be announced in the coming days.

Fans interested in becoming a Gotham FC Season Ticket Member can join the pre-sale list here. Single game and group tickets will be on sale soon.