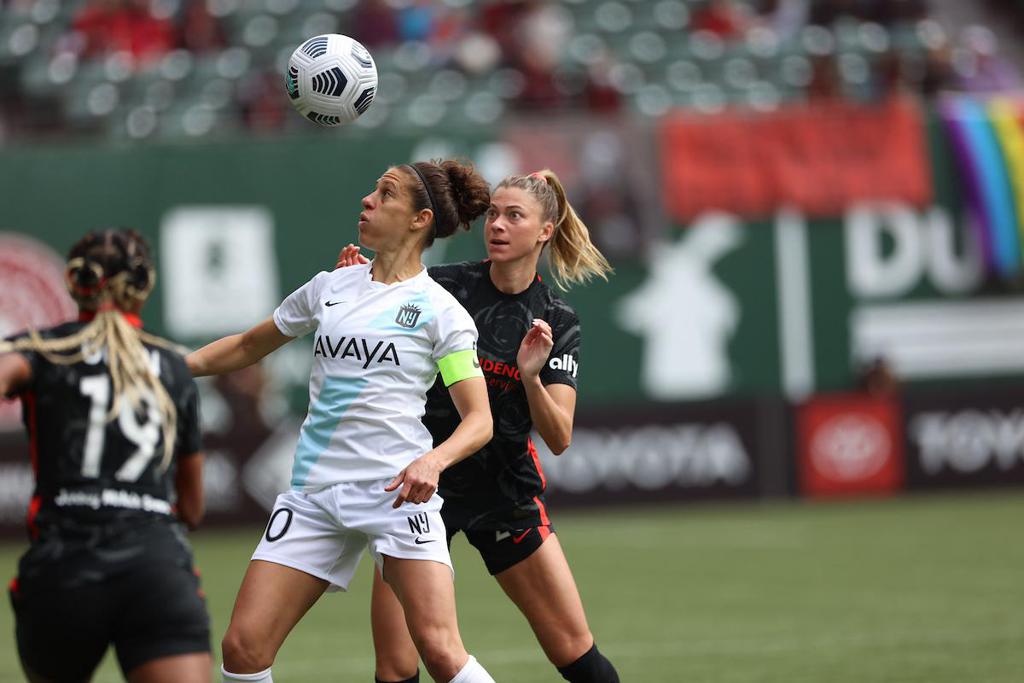 NJ/NY Gotham FC fell to the Portland Thorns in the 2021 NWSL Challenge Cup Championship on Saturday, May 8, in Portland, after losing 6-5 on penalties. With no extra time per Challenge Cup rules, regulation goals by both team captains, Carli Lloyd and Christine Sinclair, sent the match to penalty kicks where a sudden death strike proved to be the ultimate winner for Portland.

The Final started with the Portland Thorns on the scoreboard early. All-time goal scorer and Canadian international, Christine Sinclair, collected a turnover deep into Gotham FC’s own half and curled a left-footed shot past DiDi Haracic in the eighth minute. After conceding an early goal, Gotham FC had difficulty settling into the game, allowing Portland to be a persistent threat on their goal.

The Thorns nearly netted a second goal in the 39th minute on an awarded set-piece resulting from a Gina Lewandowski yellow card. Lindsey Horan delivered a strike over the wall from several yards outside the 18-yard box that was saved by the far post. Gotham FC’s attack had sporadic moments of opportunity, but it was ultimately the defense that kept the score 1-0 heading into the half.

Coming out of halftime, Portland pressed on and was determined to exhaust the visitors, but Gotham FC saw their way back into the match. Imani Dorsey floated a cross into the box that found Carli Lloyd’s head, leveling the score 1-1 in the 61st minute. Portland nearly regained the lead on several occasions in the half.  Heroics from Mandy Freeman saved the day with a goal line clearance in the 72nd minute that had DiDi Haracic beat. Minutes later, a goal by Simone Charley on a through ball by Meghan Klingenberg was called back for being offside.

Gotham FC nearly had the game-winner in the dying minutes of stoppage time as a header by substitute forward Ifeoma Onumonu connected, but glanced just wide of the goal. As a result, full-time ended and with no extra time, the match commenced to penalty kicks.

Gotham FC took a momentary 2-1 lead in the penalty shootout after veterans Allie Long, Carli Lloyd, and Portland’s Christine Sinclair all buried their shots while Meghan Klingenberg’s hit the crossbar. With an opportunity to advance Gotham FC’s lead, Jennifer Cudjoe’s shot hit the corner woodwork and allowed Portland to level the score with Lindsey’s Horan’s take. A missed strike by Nahomi Kawasumi in sudden death resulted in forward Morgan Weaver scoring and winning the 2021 NWSL Challenge Cup for the Portland Thorns.

“It’s disappointing to lose on penalties, but I’m really proud of this group. We came into this Challenge Cup wanting to win and everyone gave it everything they had, from the players on the field to the bench. I think what’s special about this group is that we haven’t even tapped into our true potential. This is a learning experience in a sense, and I want to encourage everyone on our team to take the field and know that we can go at any team, no matter who they are. We showed what we’re about and we have to continue to build off of that.”

“It’s really motivating to stand and be in a final, but not having the opportunity to lift the trophy is both tough and motivating on the players. We’ve not yet firing like we want to, but we’ve still got a lot of room for growth, which is exciting. So, for us to not have performed in necessarily the way we wanted to, but still be competitive in a final, is fantastic. The players will take that hurt with them and it will be motivating for them into the season.”

After going undefeated in the Challenge Cup, Gotham FC turns their attention to the regular season. The team opens the 2021 NWSL regular season next Saturday, May 8, at Red Bull Arena. Kickoff is set for 7:00 p.m ET and the match will air on Paramount+ (U.S.) and Twitch (international). Single, group, and season tickets are now on sale and full pricing details can be found here.