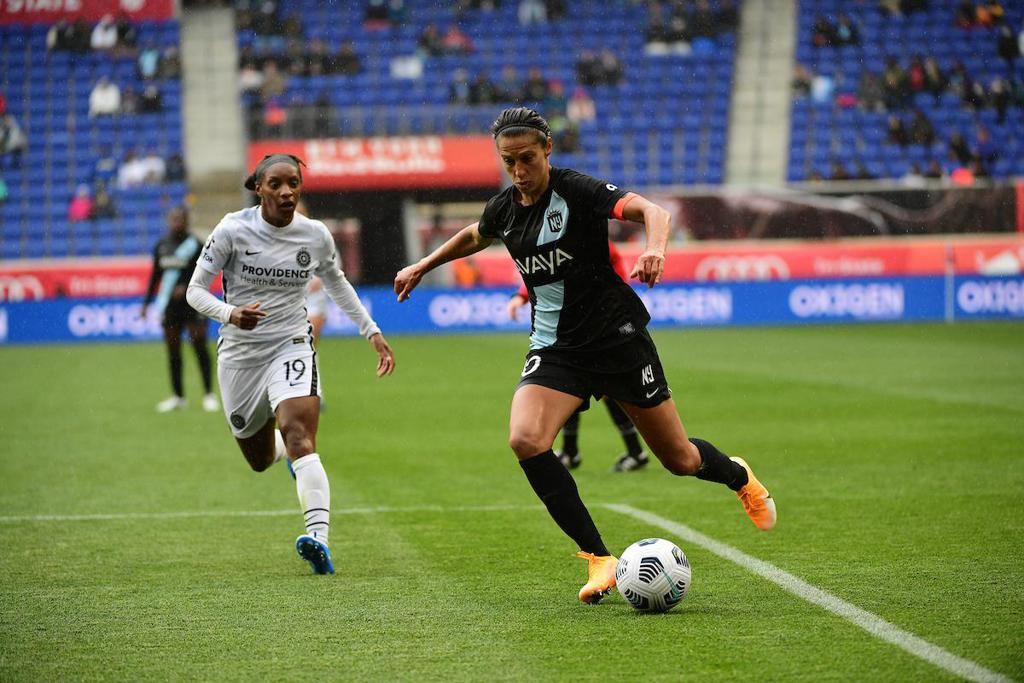 In the opening two minutes of the match, Gotham FC’s goalkeeper Kailen Sheridan was tested early with dangerous headers from both Sophia Smith and Lindsey Horan. Sheridan’s quick reactions were enough to keep Portland off the scoreboard.

Midway through the half, Gotham FC found themselves on the counter-attack connecting a series of passes. Allie Long found Jennifer Cudjoe at the top of the box where she took a shot that deflected out for a corner. Moments later, Portland found themselves back in the Gotham FC area with Smith taking on the defenders on the right-wing to find Crystal Dunn in the box. Her shot ended up hitting the right post and going out. Regardless of both teams’ efforts, they headed into the half scoreless.

Coming out of halftime, both teams got back on the attack with Gotham FC getting the best chances in the first five minutes, sending multiple crosses into the area from both sides of the field. The stalemate was broken in the 56th minute when Meghan Klingenberg found Dunn at the top of the box. A left-footed strike found the upper corner beyond Sheridan’s reach.

Gotham FC answered with a counter-attack of its own led by captain Carli Lloyd. Lloyd played a long pass to Paige Monaghan who tried to put it on frame but was unable to get past Portland goalkeeper Adrianna Franch. On Portland’s immediate counter attack, Midge Purce intercepted a pass and dribbled the length of the field before playing a through ball to Lloyd whose shot was high of the mark.

Portland nearly doubled the lead when Sheridan lost possession of the ball to Sophia Smith attempting to dribble out of pressure. Despite an open goal, Smith was not able to find the back of the net.

As the clock wound down, Gotham FC maintained a high press putting pressure on Portland’s defense in an effort to find a late equalizer. Portland’s defense was able to clear any dangerous chances, cementing their 1-0 victory and handing Gotham FC their first loss of the season.

Gotham FC will be back home next week against OL Reign on Saturday, June 5, at 7:00 p.m. ET at Red Bull Arena. After the international break, the team will head to Exploria Stadium to take on the Orlando Pride on Sunday, June 20, at 6 p.m. ET. Single, group and season ticket memberships are now on sale and pricing details can be found here.