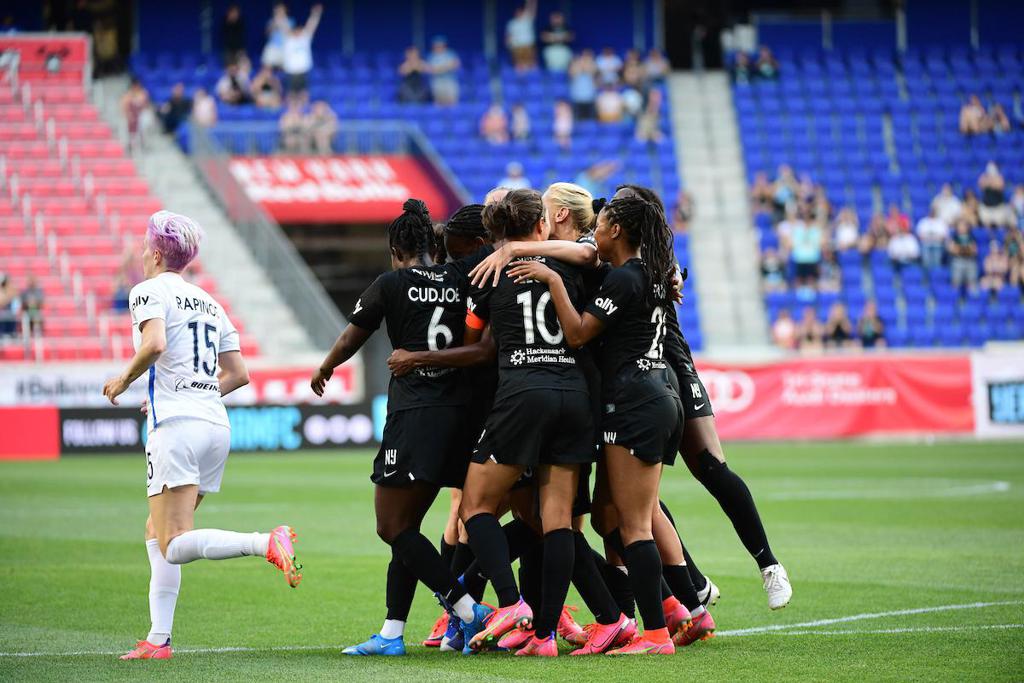 HARRISON, N.J. (June 5, 2021) – NJ/NY Gotham FC took on OL Reign for the first time this season in their second consecutive home match in as many weeks at Red Bull Arena. Ifeoma Onumonu was the lone goal scorer, giving Gotham FC their second win of the regular season.

The opening five minutes of the match saw action for both sides. Rose Lavelle dribbled up the field to find Megan Rapinoe, who took a low-driven shot that hit the opposite post and was eventually controlled by goalkeeper DiDi Haracic. Moments later, Haracic was tested again from a left sided cross from Sofia Huerta that forced her to make a diving save.

Gotham FC quickly responded in the 13th minute when they earned their first corner kick. Caprice Dydasco took the set-piece and sent the ball into the far back post to find the head of Ifeoma Onumonu, putting Gotham FC on the board early. Onumonu nearly had a second goal on a through ball from Sabrina Flores, but her shot was just wide of the mark.

The remainder of the half saw both sides with opportunities to attack including a left-footed shot from Rose Lavelle that was wide of the goal. Gotham FC continued to possess the ball well, making connecting passes down the flank, but were unable to find the back of the net for a second time heading into the half.

The second half saw a quick start from Gotham FC on an attack from the right flank that immediately forced Ella Dederick to make an early save. Lavelle had the most dangerous look for OL Reign with a shot from the right side of the box that forced Haracic to make a huge save to keep her team on top. OL Reign continued testing Gotham FC’s defense, who stayed up to the task denying them of their chances.

The final fifteen minutes saw a flurry of activity for both teams. A late tackle gave Rapinoe a chance to take a low-driven ball off a freekick outside the box that went wide. On the other end, a freekick taken by Jennifer Cudjoe into the penalty spot ended up getting cleared out. Despite OL Reign’s attempts and goal scoring opportunities in the second half, Gotham FC kept a tight defense and took the three points with a 1-0 win.

Gotham FC will be back on the road after the international break against Orlando Pride on Sunday, June 20, at 6 p.m. ET at Exploria Stadium. The team will continue on the road to face OL Reign again on Saturday, June 26, at 4 p.m. ET at Cheney Stadium. Single, group and season ticket memberships are now on sale and pricing details can be found here.