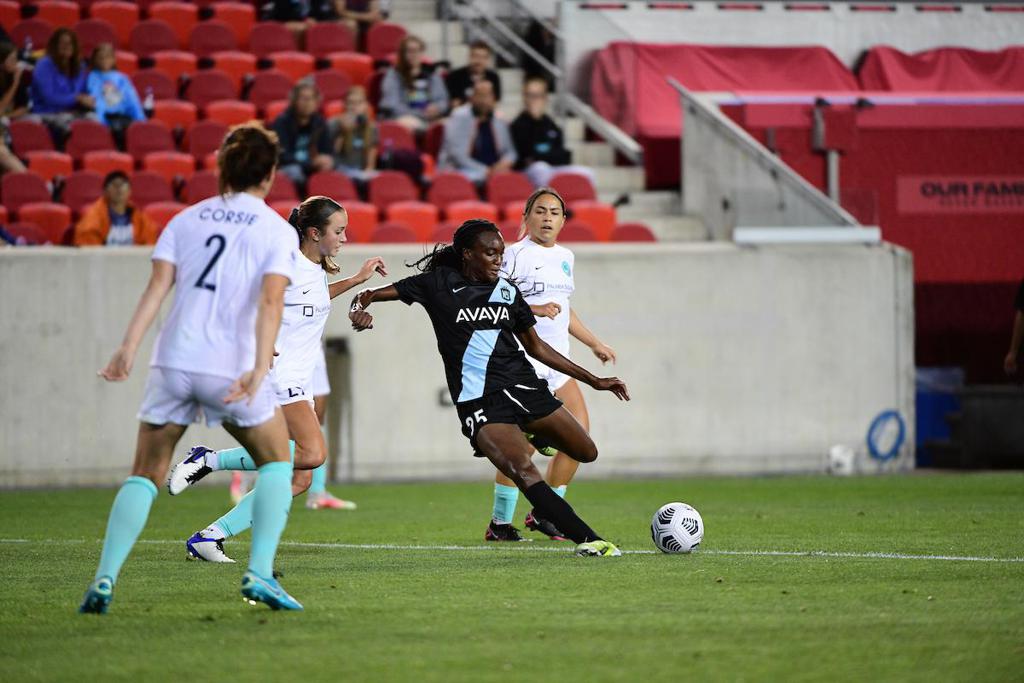 NJ/NY Gotham FC was back at home in Red Bull Arena after two weeks on the road to face Kansas City in the first ever match up between the two teams. Inclement weather prompted a several hour delay that turned the match into a late night affair once underway. The game ended in a 1-1 draw with goals from Ifeoma Onumonu and Mariana Larroquette. With the draw, Gotham FC now has 12 points on the season after seven games.

Despite over three hours of waiting due to weather delays, the match’s opening minutes saw two energized and ready-to-go teams. In the 31st minute, Nahomi Kawasumi found Onumonu at the top of the box who turned two defenders and took a low-driven shot through traffic to the far corner out of Nicole Barnhart’s reach to give Gotham FC the 1-0 lead heading into the half.

The second half saw a battle in the midfield between both teams. With a 1-0 lead late in the match, Gotham FC was closing in on its fourth win of the regular season. Larroquette played the spoiler by intercepting a missed pass from Gotham FC, beating her defender, and chipping the ball over goalkeeper Mandy McGlynn to give Kansas City the equalizer. Despite Gotham FC’s late attempts, the match ended in a 1-1 draw.

It’s my first match that started one day and finished another day. For sure never had that experience. Obviously very disappointed with the result. I think we had a strong start and I think that showed with going up. I think that we just failed to manage the game and failed to keep our performance in the second half and let them into the game. We need to do better in possession of the ball and also to be able to take our chances.”

Following the match on Friday, July 2, Gotham FC will get back on the road for the next two matches. The team will travel to Providence Park to take on the Portland Thorns on Sunday, July 11 at 3:00 p.m. ET. Gotham FC will then travel to Segra Field to take on the Washington Spirit on Sunday, July 18 at 5:00 p.m. Single, group and season ticket memberships are now on sale and pricing details can be found here.