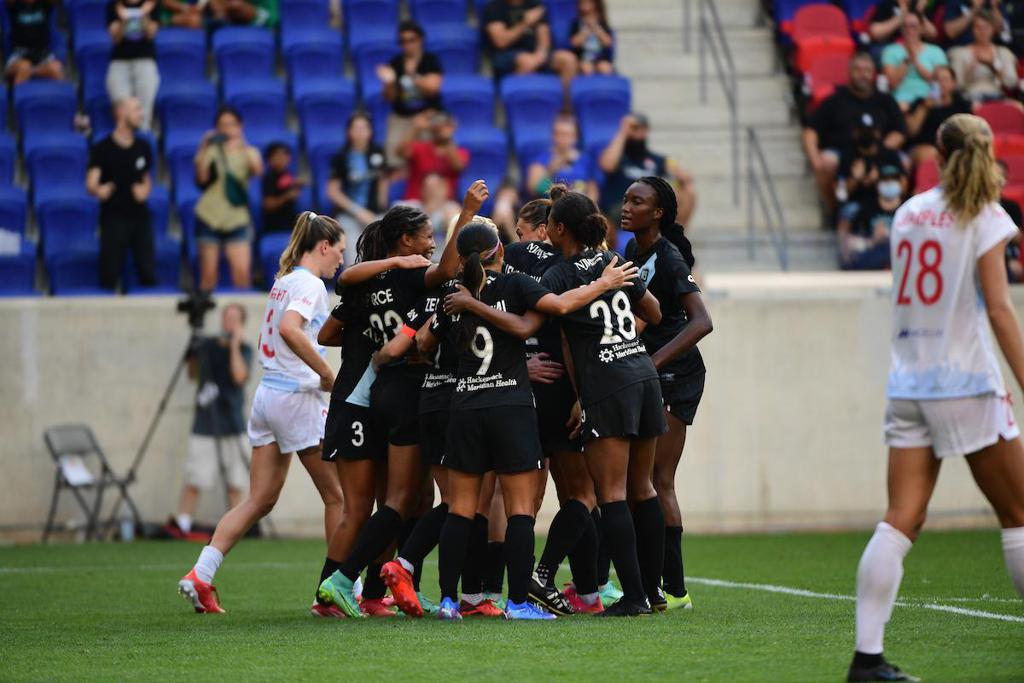 NJ/NY Gotham FC was back home at Red Bull Arena to face the Chicago Red Stars on Sunday evening. The team earned a 2-1 victory after scoring in both halves with goals from Allie Long and a penalty from Margaret Purce. Makenzy Doniak salvaged a stoppage time goal in the dying seconds of the match to cut the deficit in half. With the win, Gotham FC now moves into second place behind Portland with 19 points.

The game started with a high-pressing Gotham FC team that created some dangerous opportunities within the first ten minutes. The game continued with a battle in the middle of field from both sides until the final minutes of the half when the home team was able to break the deadlock. Caprice Dydasco sent in a cross to the penalty spot for Allie Long who beat an onrushing Cassie Miller with the deftest of touches to give Gotham FC a 1-0 lead heading into half.

The second half saw a more equally balanced match in terms of possession between the teams. Gotham FC looked to build on the lead and was able to finally do so in the 70th minute. After getting a ball in the attacking third of the field, Purce made a driving run into the box between two Chicago defenders. She was taken down just inside the box and awarded a penalty kick from referee Alyssa Nichols that she converted to give Gotham FC a 2-0 lead.

Partway through stoppage time, Brianna Pinto entered the match and almost immediately found herself on a breakaway from a McCall Zerboni pass with a clear path to goal. A professional foul from Bianca St. Georges resulted in a red card and her dismissal from the match. With time winding down and a numerical advantage on the field, Gotham FC appeared poised to shut out the Red Stars for the second time not only this season, but also in all-time matchups between the teams. With second to go, Katie Johnson found Makenzy Doniak at the top of the box who spun two defenders and was able to get a low-driven shot off to the far post that spoiled the shutout. Despite Chicago’s late efforts, Gotham FC took all three points at home and earned its second consecutive win.

“It was good for us to be able to play through some of their sustained pressure. They were very much looking to press and force us out wide and contain our play. It took us a while to figure it out and play through that pressure, but once we were able to start switching play a little bit more and started to play a little bit longer I think that caused them a few issues in terms of being able to get enough pressure on the ball. I think it was a game of few chances for both teams. Both teams defended well and were able to stop the other team from really building momentum or creating good chances, but just really happy to come away with the three points.”

Following Sunday’s match, Gotham FC will be back on the road and travel to BBVA Compass Stadium on Sunday, August 1 at 7:00 p.m. ET to take on the Houston Dash. The team will return home to take on the North Carolina Courage at Red Bull Arena on Saturday, August 7:00 p.m. ET. Single and group tickets are now on sale and pricing details can be found here.