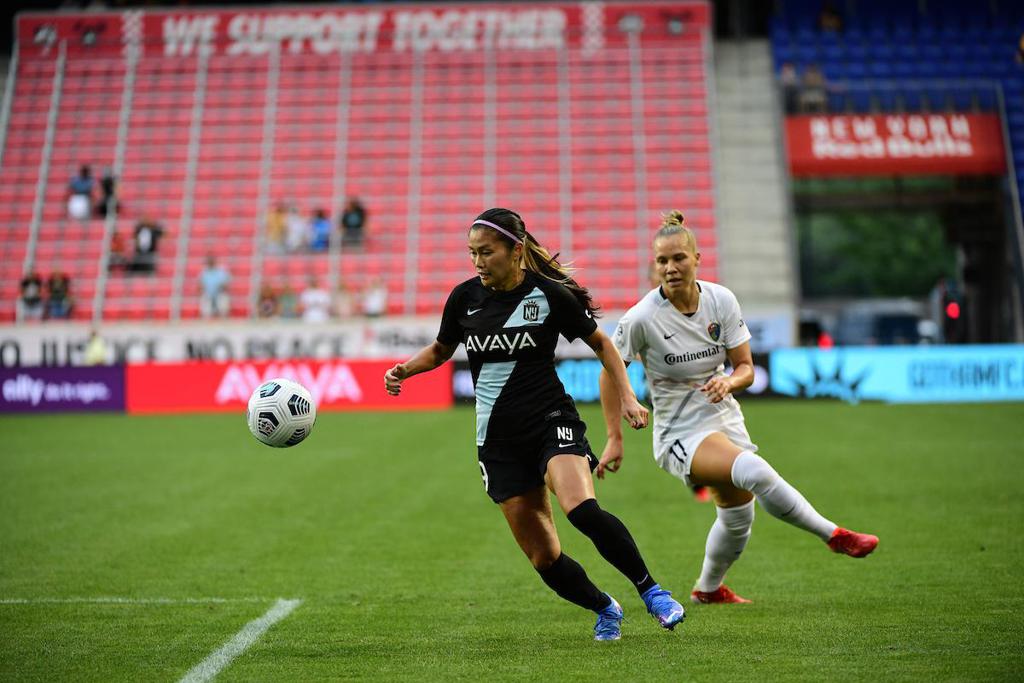 NJ/NY Gotham FC was back home at Red Bull Arena to face the North Carolina Courage on Saturday night. The team saw their first loss in eight games, and second loss overall, after a North Carolina goal in the 38th minute from Meredith Speck. With the loss, Gotham FC holds steady at 20 points and moves down the table to third place behind Portland and North Carolina.

The first half saw a battle in the midfield that created a lot of back and forth between both teams. In the last ten minutes of the half, Carson Pickett sent a ball into the box that connected with Jessica McDonald’s head. DiDi Haracic made the initial save, but Speck cleaned up the rebound to give North Carolina the lead. Gotham FC nearly responded back when Delanie Sheehan got a ball on the right flank and saw Nahomi Kawasumi open on the back post. Kawasumi hit a right-footed volley that forced a tough save from Casey Murphy to keep the score 1-0 heading into the half.

Gotham FC maintained a high-press throughout the second half, but was unable to capitalize on any of the chances created. The home team’s best chance came in the 90th minute when Caprice Dydasco made a run down the right flank and found Kawasumi on the back post who put it back into the mix for a Brianna Pinto header that went just over the crossbar. Despite Gotham FC’s efforts, North Carolina held the 1-0 lead for the win.

“It was a very close competition in terms of possession also in terms of shots on goal, shots on target, etc. Unfortunately, it went their way tonight with that goal. We had a similar situation with McCall Zerboni last week that was called offside. Unfortunately it didn’t go our way with the offside call tonight and that can sometimes be the difference between winning and losing.”

Following Saturday’s match, Gotham FC will close out a two game home stand at home on Sunday, August 15 at 5:00 p.m. ET against Racing Louisville. The team will then travel to Cheney Stadium to take on OL Reign on Saturday, August 21st, at 10:00 p.m. ET. Single and group tickets are now on sale and pricing details can be found here.