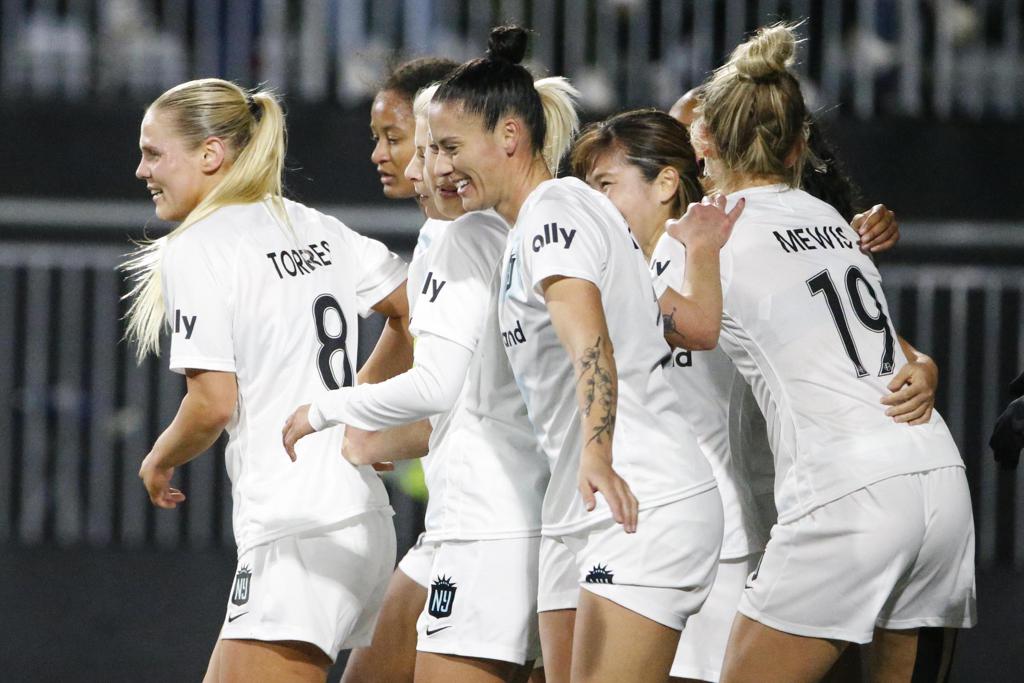 LEESBURG, Va. - NJ/NY Gotham FC picked up a hard-earned point in a 1-1 tie with the Washington Spirit Friday night in Challenge Cup action. The draw puts Gotham at 0-1-1 (1 point) and the Spirit at (0-0-2) in the East group of the tournament.

Kristie Mewis scored on a penalty in the 23rd minute to give Gotham the early lead, but Ashley Hatch drew the defending NWSL Champs even with a score 16 minutes into the second frame. Despite Washington going down to 10 players after Amber Brooks was handed a second yellow card in the 65th minute, Gotham could not muster the go-ahead tally and settled for the point.

“A slight step forward,” head coach Scott Parkinson said after the match. “A little bit more quality on the ball, a little bit more intensity, but still not quite there with the aggression that we're going to look for when we get people in areas that we want to keep, but tonight was a step in that direction. It was fantastic to see Kristie and Iffy out there. Washington won the title last year, so I suppose the point tonight is better than nothing.”

Ashlyn Harris had a busy night, making nine saves and saw the Spirit fire off 29 shots on the evening. Gotham was held to eight attempts with Mewis and Paige Monaghan posting two apiece.

The Spirit had the first several opportunities of the contest, but Harris was up to the task early on.

In the seventh minute, a long clear by Andi Sullivan went to Tara McKeown making a long run down the left side. Harris came out to close off the angle and forced the first shot of the game wide. After another Washington chance just outside the box moments later went high, Harris was forced to make another stop in the 10th minute when Ashley Sanchez tried to hit the lower left corner.

Gotham found some creativity in the 15th minute when Nahomi Kawasumi played a nice pass to Mewis for a shot that sailed high from just outside the box. Gotham continued to apply the pressure over the next several minutes and drew a corner in the 23rd minute.

After a scramble, Midge Purce was fouled in the box to set up Mewis’ first score with the club. The midfielder calmly flicked a left-footed shot into the lower right corner for Gotham’s first goal of the Challenge Cup.

“It obviously felt really good to put the Gotham jersey on tonight and represent the club,” Mewis stated. “I'm just really excited and grateful to be a part of this club. And obviously to get my first goal with the team was really special and I'm glad that I could give an impact like that.”

It was a quiet start to the second half until some turnovers led to Washington chances around the 56th minute. The Spirit came up with a flurry of four shots and finally broke through on the fifth try when an attempted clear off a header went right to Ashley Hatch. Hatch had enough space to rip one into the near side of the cage to knot the score at 1-1.

After Brooks, who drew the first card in the 37th minute, was sent off it was the Spirit who had the better scoring threats and compiled 10 shot attempts over the final moments.

Gotham FC will remain on the road to take on the Orlando Pride on Wednesday, March 30 at Expedia Stadium. Kickoff is set for 7 p.m. on Paramount+ and Twitch for those watching internationally.