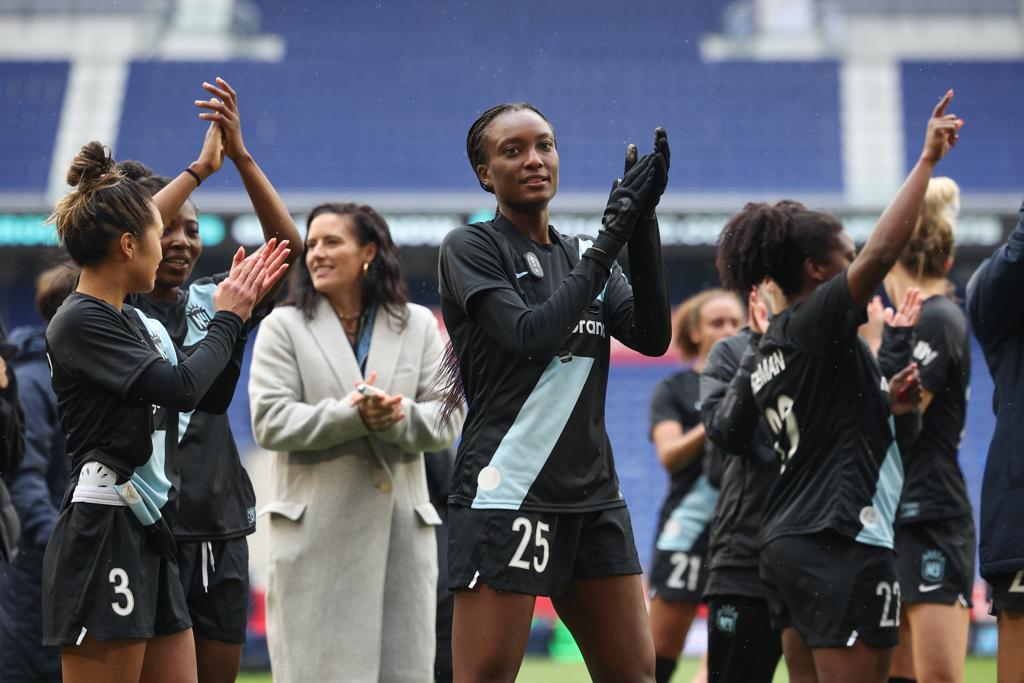 HARRISON, N.J. - NJ/NY Gotham FC used a late header from Ifeoma Onumonu in the 84th minute to pick up a 1-1 tie against the North Carolina Courage Sunday afternoon. The draw keeps Gotham (1-1-2, five points) within striking distance of the first-place Courage (2-0-2, eight points) with two group matches remaining in the Challenge Cup.

“I think North Carolina thought they had us on the ropes, but with our players, it’s hard to knock us out,” said head coach Scott Parkinson. “What I’m loving is the quality to hang around in games and give ourselves and opportunity. That’s got nothing to do with coaching, that has everything to do with the players and the city we play in and represent. I believe it builds our DNA.”

After seeing North Carolina take the lead and hold advantage in the head-to-head stats, Gotham came through with its strongest effort of the match in the final 15 minutes. The equalizer came off a clinical corner from Kristie Mewis. The left-footed boot found the head of Onumonu, who placed it perfectly in the lower far post to knot the score up.

“We gave up a free kick (in the 75th minute) and I was like, ‘alright, it’s time to believe,” said Onumonu. “You have to look for that one chance and when you get it, you have to finish. So that’s where it came from for me. I trust my teammates implicitly so it’s just about having the ability to switch the mentality (and push through).”

Goalkeeper Michelle Betos was tested early in the match, but made a diving save in the second minute off a boot from Carson Pickett. However, a foul just outside the penalty area led to North Carolina’s first-half mark. Debinha stepped up to take the set piece and delivered a perfect shot to the bottom left corner to put the Courage on top.

Betos, a native of nearby Queens, finished with six saves in her Gotham debut.

“It is a lifelong dream come true,” Betos said after the game, “To be playing in this stadium and to play in my backyard it doesn’t get much better than this. Our fans have been incredible and they brought energy and I think it can help you get a goal (like we had today).”

Gotham FC is back in action at Red Bull Arena on Sunday, April 17, against the Washington Spirit. Kick-off is set for 3 p.m. ET. Tickets are on sale now and can be purchased by clicking here. Fans can also watch the action live on Paramount+ in the U.S. and on Twitch internationally.