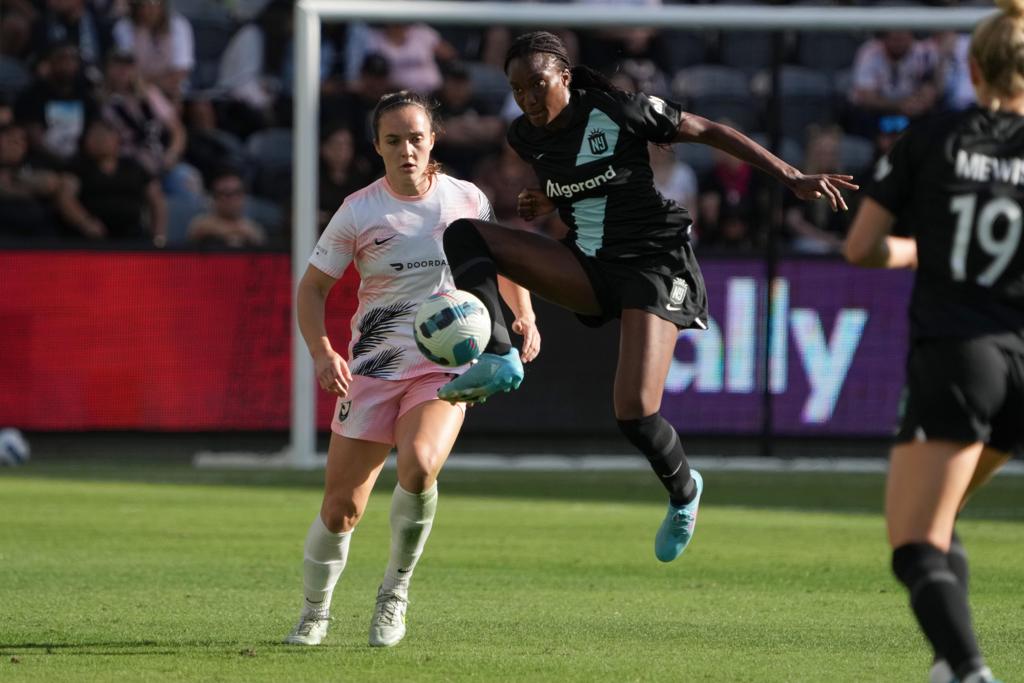 LOS ANGELES – Ifeoma Onumonu scored in the 57th minute and NJ/NY Gotham FC held off a furious rally to earn a 1-0 victory over Angel City FC Sunday. Goalkeeper Ashlyn Harris made seven saves to earn her second clean sheet of the season and now has over 500 for her career.

“We really did things together today and stuck to the game plan,” head coach Scott Parkinson said. “I think when you do that, that’s when you make your luck.”

The first half was distributed fairly evenly, but Angel City (3-2-0, nine points) generated the bulk of the scoring opportunities early on. However, Gotham FC (2-2-0, six points) defended well in the box, limiting the home side to just two shots on target that Ashlyn Harris was able to turn away.

Angel City put some pressure on in the middle stages of the frame, earning a pair of corners in the 24th minute that were minimized by some strong work by the back line. Later in the 27th minute, ACFC played a dangerous cross near to the left end line, which bounced off three heads and over the bar for another corner try.

There was some push in the Gotham FC final third in the closing moments of the half, but it could not break through as the teams headed to their locker rooms scoreless.

Gotham FC’s breakthrough came when Caprice Dydasco put a centering feed to the chest of Onumonu. Angel City was slow to clear, allowing Midge Purce to one-touch it back to Onumonu for a shot that beat DiDi Haracic on the near side.

Angel City nearly answered right away, just missing on a pair of header attempts and Harris broke up a corner piece in the 60th minute to preserve the advantage.

After holding off that threat, Gotham FC dictated much of the play until the final 10 minutes. Harris made a sprawling save off Jun Endo in the 80th minute and then had to defend a myriad of corner tries. Angel City was able to get touches inside the 18, but Gotham FC’s defense continued to clog the middle and blocked several shots.

Savannah McCaskell had the best opportunity of all, making an open run to the far post, but her shot was off the mark in the 86th minute. Moments later, Harris was forced to come up with another diving stop on Cari Roccaro and the defense remained up to the task to preserve the win.

Gotham FC hosts the Washington Spirit on Saturday, June 4 at 7 p.m., which marks the club’s annual Pride Night. Tickets are available and can be purchased by clicking here. Fans can also catch all the action live on Twitch in the U.S. and internationally.