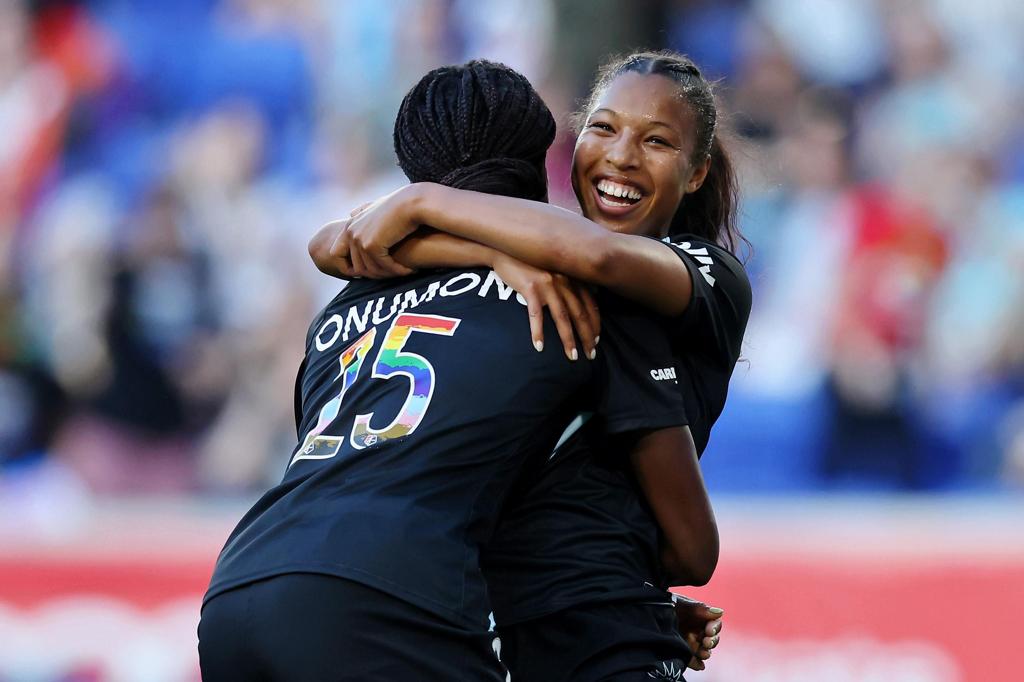 The win marked the first for the club at its new home, Red Bull Arena, as the franchise celebrated Pride Night.

The corner kick flags were rainbow-colored as players warmed up with their preferred pronoun on the backs of their kits. The numerals on the back of their game jerseys were changed from their usual white to Progress Pride Colors.  The first 3,000 fans received Gotham FC pride bracelets and the pride merchandise collection was also on sale before the team's kickoff off with both in Pride-themed jerseys.

“I'm so grateful to be a part of this club because I feel like something that we really work to embrace is diversity,” Gotham FC’s Imani Dorsey said. “We were talking today about how special Pride is, but also how it began, and I think it's something important to recognize that it's sad that we have to create space to celebrate marginalized communities, but the fact that we do it consistently now is so important, so special, and I'm grateful to be a part of it.

"And try to use my voice with my teammates and to make sure we're advocating for the right things, especially when it comes to the climate of our world right now in terms of a lot of the terrible legislation that's been attacking trans youth and LGBTQ youth. It's really important that we speak up and show our fans in this community that you're welcome here no matter what.”

Gotham FC was on the attack early, with a couple of early threats in the opening moments. Gotham FC (3-2-0, 9 points) broke through in transition when Paige Monagham passed to Ifeoma Onumonu on a longball, who crossed it to Purce. Purce found the back of the net for her second goal of the season to give the home team the 1-0 on Washington (1-1-4, 6 points) lead in the 21st minute.

While both squads had a couple of chances late in the first half, the teams would go into the break with 1-0 lead after Gotham FC keeper Michelle Betos stuffed the Spirit’s fast-break attempt on Ashley Hatch’s shot and Betos jumped on the rebound to end the half.

“As a team, they were ready,” coach Scott Parkinson said. “That’s as good of a first half as we’ve ever had.”

Betos continued her heroics early in the second half, with a diving save in the first few minutes as Gotham FC’s stifling defense closed out the game that included six minutes of stoppage time.

“Beto’s was unbelievable, the save late in the second half. Unbelievable. And then again how she managed the game,” Parkinson said, adding of the Queens, NY native, “Monumental performance. Second straight clean sheet. I think for her it's probably what dreams are made of  playing in front of [6,443] fans 30 minutes from home.”

However, it did include a scary moment when Betos and teammate Mandy Freeman’s heads collided. Fortunately, both were able to finish the game as Gotham FC held on for the win.

Gotham FC will hit the road to take on KC Current on Saturday, June 11. The kickoff is set for 8:30 p.m. ET.  Fans can also catch all the action live on Paramount+ in the U.S. and Twitch internationally.