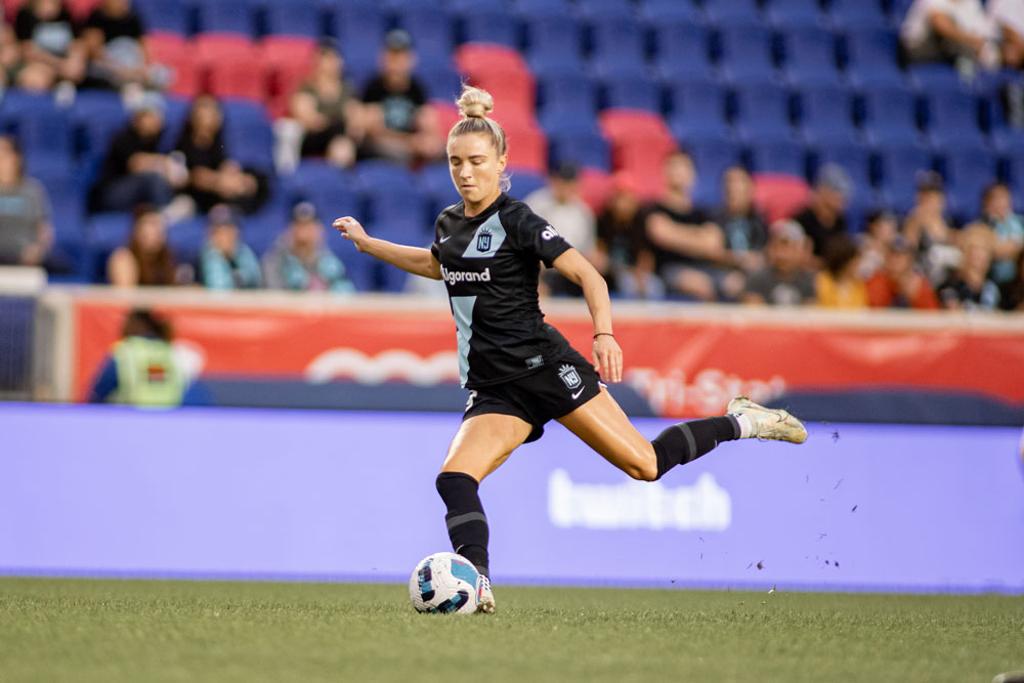 HARRISON, N.J. – For the second match in a row, NJ/NY Gotham FC suffered a 1-0 loss at Red Bull Arena, this time at the hands of the Kansas City Current.

Rounding out their three-game home stand, Gotham FC returned to Red Bull Arena for a rainy Sunday match against the Current. The two squads entered the game in opposite form, as Kansas City rode a 12-game unbeaten streak, with Gotham FC dropping their last eight matches. The home side was eager to reverse the narrative of the table and came out strong from the first whistle.

Gotham FC dictated the pace in the first half, with many players creating energy up and down the pitch. Taylor Smith had a couple of solid runs within the first 15 minutes of play, and Paige Monaghan found Ifeoma Onumonu in the 16th minute for a seeing eye shot that just missed to the left of Kansas City’s cage. Michelle Betos held the back line together, and the match entered halftime knotted up at 0-0.

The second half was a back-and-forth affair, with both sides getting some great chances. Kansas City’s closest chance came in the 58th minute, as a looping ball was deflected into the air by Michelle Betos. The ball floated overhead and almost across the line, but Paige Monaghan saved the day and knocked the chance out of play. However, the Current would maintain pressure, and finally broke through the Gotham defense in the 78th minute. After a penalty by Ellie Jean inside Gotham FC’s box, Hallie Mace stepped up for a penalty kick which she rocketed past Betos.

Gotham FC came back swinging, eager to tie the match in the final ten. A couple of amazing chances from Kristie Mewis found the crossbar, but the comeback effort would not be enough as the match ended 1-0 in favor of the visitors.

After the game Kristie Mewis spoke on the missing piece for NJ/NY, “I don’t think they outplayed us by any means, I think we have to find that final piece right now which is to score goals and grind out wins.”

Head Coach Hue Menzies echoed a similar sentiment in his post-match comments, focusing on how his team needs to execute in the final third. “At the end of the day we have to win both boxes. I think we have the players, it’s the attitude that we have to have,” he said.

Another tough loss in front of the home supporters, Gotham FC Goalkeeper Michelle Betos spoke about what it means to play for NJ/NY, “You have to take the bad with the good, I love this group, I love this team, I love representing this city. It would be really easy to give up since technically, mathematically, we’re out of the playoffs, but I’m just so proud of this group, because what I grew up believing is you fight. You fight till the end, and that’s what this team is doing from the top down.”

Gotham FC’s next match will see them travel to the nation’s capital to take on the Washington Spirit on September 17th. They return home on September 21st to battle OL Reign, as the NWSL regular season winds to a close. Tickets to home games can be bought at GothamFC.com/Tickets.