Pickett, Johnson Reflect on Loss in DC, Look Ahead to OL Reign 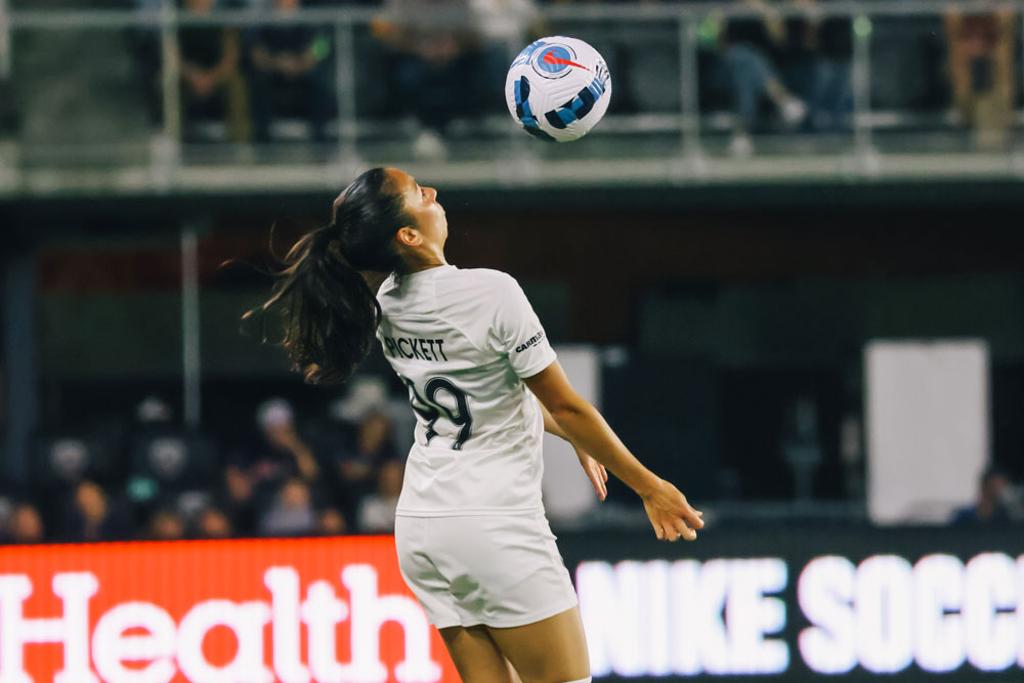 After Gotham FC suffered a tough 2-0 defeat to the Washington Spirit on Saturday at Audi Field, the players and interim head coach Hue Menzies remained united in their belief in their game plan, approach and commitment, and in each other.

“It was a disappointing result, but it doesn’t reflect on our effort by any means,” said midfielder Victoria Pickett. “In the second half especially, we really executed our plan. It’s disappointing, but I’m still very proud of this team.”

For their first game away from Red Bull Arena in three weeks, Gotham FC traveled to the nation’s capital for a rivalry match with the Spirit. With both teams struggling, Saturday’s match was all about finishing the 2022 season on the right foot. Since Gotham FC took the first meeting between the clubs back in June, Washington was eager to flip the script before a large and loud crowd at Audi Field.

The match started with good energy from both sides, paving the way for a back-and-forth affair. The home crowd and visiting fans provided great energy under the lights, as the Spirit generated their first scoring chance in the 16th minute. Trinity Rodman played Ashley Sanchez into the box, and Sanchez struck the ball towards the Gotham FC net. Goalkeeper Michelle Betos answered with a phenomenal kick-save, keeping the match at a stalemate. The teams finished the first half knotted at 0-0.

“They’re one of the strongest attacking units in the league,” said Gotham FC defender Estelle Johnson. “It’s always a challenge playing against them. The key to it is energy and always trying to stay one or two plays ahead, which is really hard to do since they’re so dynamic. The game plan was to cover each other and make sure we don’t get stuck in too many 1v1 battles, and I think we did a pretty good job of that.”

The second half would mimic the first, with both teams balancing possession most of the way. However, in the 51st minute, Tara McKeown opened the scoring for the Spirit. Sanchez then put the match out of reach with a goal in the 86th minute.

“Even though we’re not getting the results, the unity is there,” said Gotham FC Interim Head Coach Hue Menzies. “They’re really digging deep together. The training sessions have been great, fantastic. We just have to get better in our execution in games. Losing is tough at this level. We’ll have some time to reflect on things, but now is not the time. Right now, we just have to go after it.”

Their next shot is Wednesday, when Gotham FC returns home to take on OL Reign. Tickets to home games can be purchased at GothamFC.com/Tickets.

“The backline has been getting better and better every week as of late, so obviously this is a disappointing loss — as many of them have been recently,” said Johnson, a standout defender who played for Washington before joining Gotham FC in 2019. “It doesn’t feel like we are getting rewarded for the defensive work that we’re doing, but such is football. We’re going to keep plugging away.”

Of the final three-game stretch that begins with OL Reign on Wednesday, Johnson said, “We can do our best to go out with a bang. It’s not like we’re just going to roll over and let the season pass us by. We still have to prove ourselves as pros and leave the season with our heads held high. That’s what we’re trying to do.”

As many of her teammates have before her, Victoria Pickett provided a window into the unity of Gotham FC despite the tough times, and her reasons to believe – especially noteworthy, since Pickett only joined the team four weeks ago.

“I love this team so much,” said Pickett. “It’s been such a short period of time, but I consider them family. They’re so encouraging. They’re so supportive. They’re great communicators.

“I love the game plans Coach and the rest of the staff put together. I love our practices. Coach does a great job of managing players. The results of the last few games are not a reflection of the team. We need to do a better job in the final third. We need to find the net. But what’s so great about this team is we are focused on the now. We are focused on finishing this season strong. I think we can do it.”

Pickett thought for a very brief moment, and then completed her statement.