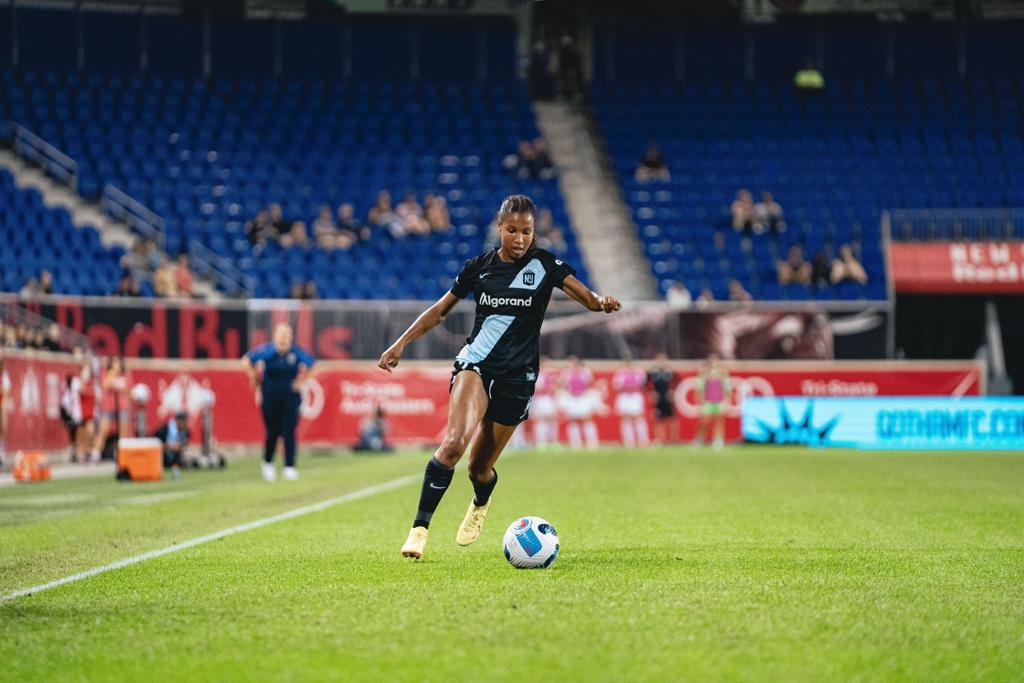 After the final whistle, Red Bull Arena watched their beloved Gotham FC head into the locker room after yet another tough loss, this time 1-0 at the hands of OL Reign. However, the messages that followed were not those of gloom, but of a distinct belief of the players in their club.

The first mid-week match in some time for Gotham FC, they welcomed the Reign who came in fresh off a win against North Carolina. The Seattle squad showed no sign of slowing down, attempting to tighten their solid grip on an NWSL playoff spot. An even match throughout, the balance of OL was too much for NJ/NY, which saw them notch another consecutive feat.

While Wednesday’s match saw Gotham FC unable to break through the opposing team’s backline once again, they echoed how close they are to putting all the pieces together. United States Women’s National Team Star Megan Rapinoe scored the only goal of the match, rocking a penalty kick past Gotham FC’s Michelle Betos in the 58th minute.

Dominating possession and equaling the vaunted Seattle side in shots on target, Gotham FC just couldn’t unlock that final part of the equation with a goal. Forward Midge Purce returned to the lineup and spoke about how she felt the team finally coming together in the losing effort. “I think today we finally got on the same page in terms of tactics,” Purce said, “I want to see goals. I want to see more chances. I hope we can break down teams together, and I think we’re getting close.”

For Gotham FC the message continued to be one of pride and hope. Veteran leadership has made it known that they stick together as a team, and that’s exactly what Ali Krieger echoed in her post game comments.

“We want to show how much pride and love we have for the game. We want to work our butts off and win games. This has not been an easy season,” said Krieger. We want to finish the season off well and win these last two games. It’s almost there. We are playing much better than we were. We will give everything we have for our fans, each other and Hue and the coaching staff.”

Strong words that Gotham FC will look to live by as the end of the season rears its head. With only two matches remaining, this team is all about showing what they’re made of and that has been made apparent. A quick turnaround before their next match, they’ll enter WakeMed Soccer Park ready to roll.

After that Gotham FC will finish the season against Portland on October 1st at Red Bull Arena. To see the NJ/NY side play one last time in 2022, buy tickets at GothamFC.com/Tickets.