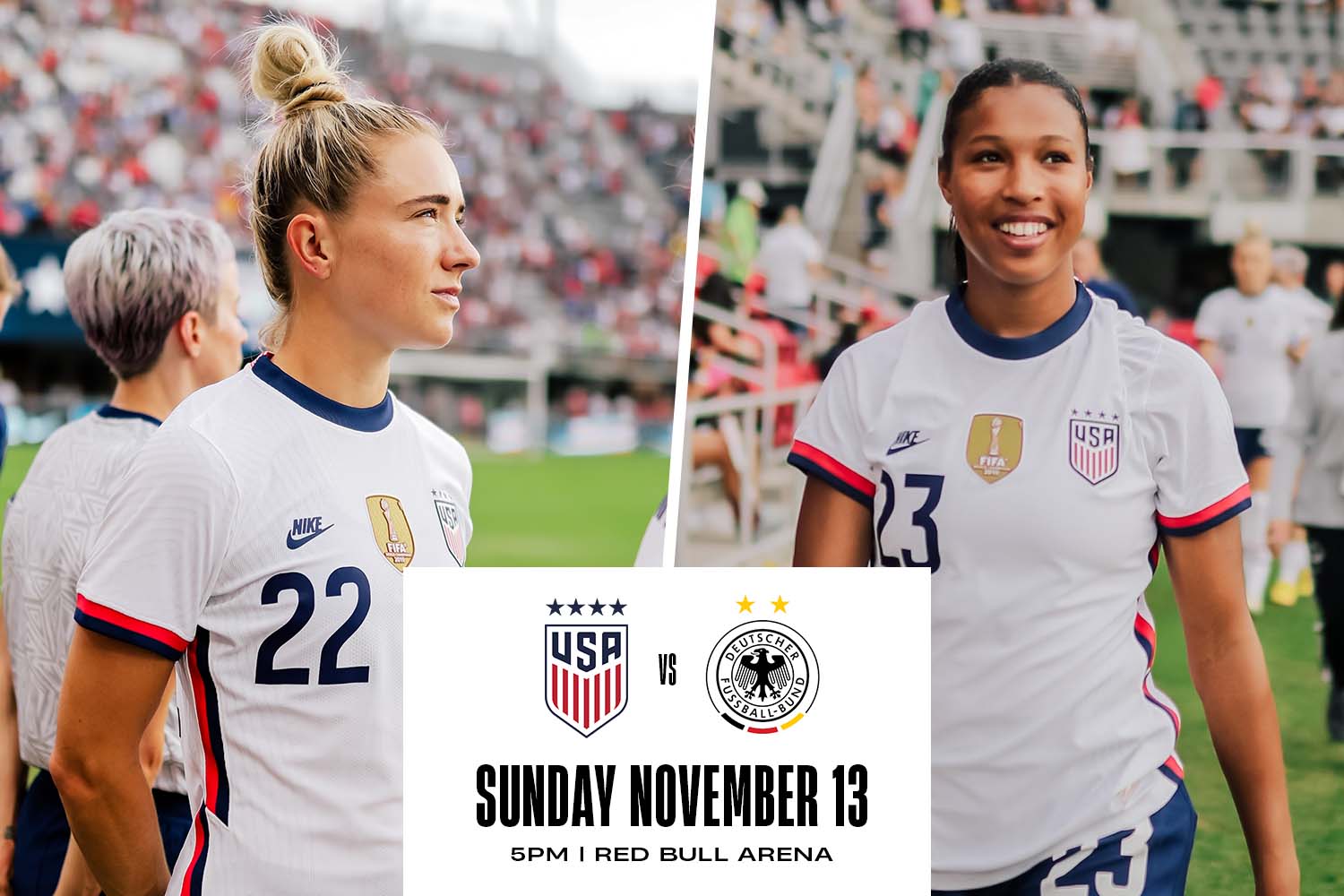 The match will bring together the top two teams in the latest FIFA Women’s World Rankings with the USA sitting first and Germany second. The match will mark the USWNT’s eighth game at Red Bull Arena – the home of the NWSL’s NJ/NY Gotham FC and MLS’ New York Red Bulls. Of the USA’s last five matches at Red Bull Arena, three were sell-outs and two others fell just short, drawing crowds of 25,706 and 26,332.

“Playing Germany in the final matches of the year will be ideal for our World Cup preparations for all of our players and coaching staff, but it’s also fantastic for all the fans,” said U.S. head coach Vlatko Andonovski. “USA-Germany is always one of the most entertaining match-ups in women’s international soccer and it’s a rivalry that has some wonderful history as well.”

These will be the USA’s first meetings with the two-time Women’s World Cup champions and eight-time European champions since the 2018 SheBelieves Cup, a 1-0 U.S. victory played in challenging weather conditions in Columbus, Ohio.

On Sept. 3, Germany qualified for the 2023 FIFA Women’s World Cup with a 3-0 victory over Turkey (followed by an 8-0 trouncing of Bulgaria on Sept. 6) and topped Group H in UEFA qualifying with a 9-0-1 record while scoring 47 goals and allowing five.

At the end of July, Germany made an impressive run to the title game of the 2022 UEFA Women’s Euro, but fell in overtime to host England, 2-1, in front of a record crowd at Wembley Stadium. Midfielder Lina Magull scored Germany’s lone goal in the final, which was played without star forward Alexandra Popp, who was injured during warmups and could not add to her six tournament goals, which tied for most in the competition.

Germany boasts some of the top young players in the world and several world class veterans, which will make for two compelling games to end the USWNT’s 2022 schedule of matches.

TICKETS
Presale for the match will begin on Monday, September 26 with the public sale beginning Monday, October 3. Dependent on remaining ticket availability, groups of 20 or more can order at ussoccer.com starting Tuesday, October 4.

PRESALE SCHEDULE FOR USWNT vs. GERMANY ON NOVEMBER 13

VISA PRESALE
As the official payment technology sponsor of U.S. Soccer, Visa® has made special arrangements for Visa cardholders to participate in an advance sale of tickets. These advance sales will take place from Sunday, October 2 at 10 a.m. ET to Monday, October 3 at 8 a.m. ET through the purchase links at ussoccer.com. As the preferred card of U.S. Soccer, Visa will be the only payment method accepted during the Visa presale. Terms and conditions apply.

COVID-19 WARNING AND EVENT SAFETY PROTOCOLS
An inherent risk of exposure to COVID-19 exists in any place where people gather. COVID-19 is an extremely contagious disease that can lead to severe illness and death. You assume all risks, hazards and dangers arising from or relating in any way to the risk of contracting COVID-19 or any other communicable disease or illness, or a bacteria, virus or other pathogen capable of causing a communicable disease or illness, whether occurring before, during or after the event, however caused or contracted, and voluntarily waive all claims and potential claims against U.S. Soccer, DRV PNK Stadium, Red Bull Arena, Ticketmaster, Live Nation or other Event Providers and their affiliated companies relating to such risks.

STADIUM SAFETY PROTOCOLS
U.S. Soccer will follow official local health guidelines for this event. Fans are encouraged not to bring in bags of any kind. All tickets will be mobile-only. There will be reserved seating only; general admission will not be allowed. All concession stands will be cashless to reduce points of contact. Ticket holders are subject to U.S. Soccer’s Ticketing Terms and Conditions and Fan Code of Conduct.